Scientist, professor, inventor, business owner, mother, world traveler, hero. Which name tag will Sunyoung Kim, PhD, wear today? Recently, the answer has been all of them. 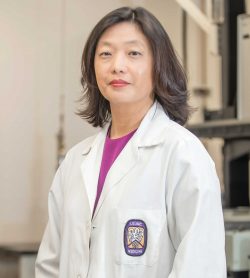 This story begins when Dr. Kim — an LSU School of Medicine professor of Biochemistry & Molecular Biology — was asked by local neonatologists to create a test for neonatal necrotizing enterocolitis. NEC is the most common and serious intestinal disease among premature babies and occurs when fragile bowel tissue is injured or begins to die off. It’s difficult to detect, and at-risk babies are often already in serious danger once doctors identify it.

All of that will change thanks to Dr. Kim and her lab staff, who created a three-pronged protein test that registers particular values pointing to infant NEC. Preemie babies’ lives will be saved.

“Scientific and biomedical discovery is a trial-and-error process; it requires know-how, attention to detail, creativity, a willingness to let go of assumptions and perseverance,” Dr. Kim says. “The initial hypothesis [of how the test might work] by the neonatologists wasn’t correct, but pursuit of other ideas for a year and a half uncovered this particular biomarker set for NEC.”

To support her discovery, Dr. Kim formed a biomed company, Chosen Diagnostics, and in November was the first woman to win the $25,000 grand prize at the annual New Orleans BioInnovation Center’s BioChallenge Startup Competition. From there, things began to get a little surreal.

She had just gotten home from the awards ceremony when her phone started to ring. That night alone, she spoke to three sets of parents — one who attended the event, two who read about the BioChallenge on the internet — all who had lost infants to NEC and wanted to express their excitement that someone was working to provide medical tools for the disease.

“I was stunned,” Dr. Kim says. “I had been focusing on the business and research, and suddenly I was confronted by the very real world of patients, families and losses. To be sought and encouraged by these parents who have lost a part of themselves was incredibly humbling.”

Chosen Diagnostic also took home the $60,000 top prize for the 2017 JEDCO Challenge at New Orleans Entrepreneur Week in March and was voted “crowd favorite” at both JEDCO and the BioChallenge. The day after each competition, Dr. Kim was back at work in the lab, and in the classroom, albeit with a lot more demands for her time and attention. Now her group has a second product to launch and three potential ideas envisioned for the next few years.

It makes perfect sense that a solution for NEC would come from this region as Louisiana (along with Mississippi and Alabama) is among the top three states in the nation for premature births. But for Dr. Kim, there’s another good reason. “New Orleans and Louisiana have a strong sense of family,” she says. “Caring for future generations is a top priority.”

LSU support: “A LSU Baton Rouge program called Innovation Corps really provided our initial education,” Dr. Kim says. “Although universities in general were founded as protected centers of basic science and medical research, LSU Health is working with me to explore how best to bring innovation and its commercial translation into the classroom for those who wish to pursue this path. In general, the whole of LSU Health is driven by the spirit of innovation and science discovery. In just my hallway, we have research laboratories that are invested in a number of different rare human diseases, such as malaria, Ebola, Zika and neurodegenerative conditions.”

Staff support: “I am a very lucky woman,” Dr. Kim says. “I get to go to work every day with a group of people who are grounded, passionate about science innovation and excellent in their own disciplines. These individuals are also incredibly encouraging of my pursuits. The majority of my research group are Louisiana daughters and sons, and their work has garnered us a national and an international reputation for excellence and intellectual advancement.”

Family support: “I so enjoy my two kids [16 and 9], and I am married to someone who is unfailingly supportive and caring,” she says. “My husband is the only man I know who is strong enough and smart enough to let me be me.”

Why juggling so many selves is so worth it: “It appears that I have the ability to innovate,” Dr. Kim says. “I am persistent and can stomach measured risk to create a better future. Innovation creates a shift that can affect all of our lives. I have chosen to focus on creating solutions for underserved biomedical problems. Even if there is a sacrifice on my part, is it worth it to me? Absolutely, yes. It is our responsibility to help others.”