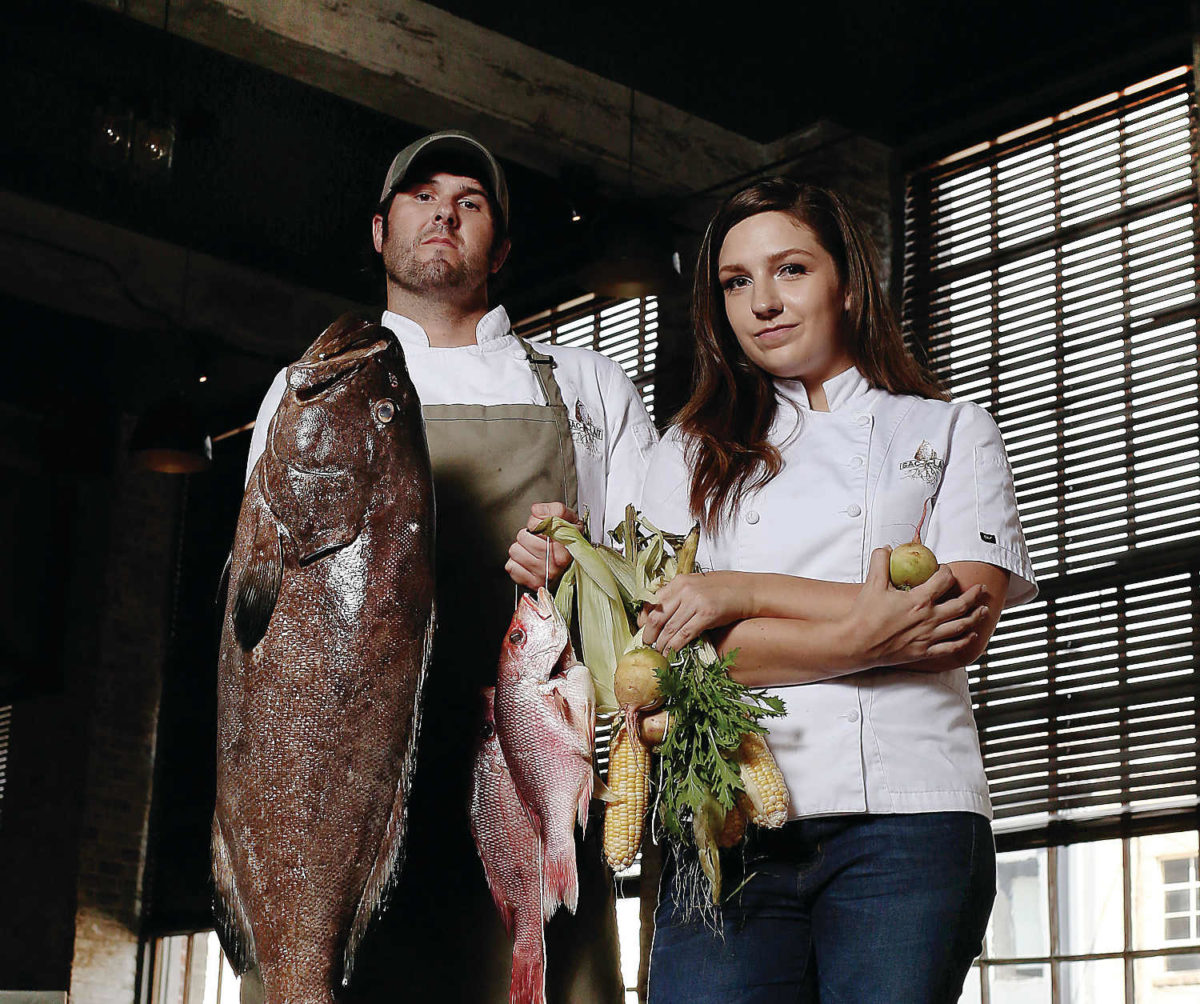 Samantha (Sam) and Cody Carroll, the adorable couple behind Sac-a-lait restaurant in the Warehouse District, recently debuted on a new TV show called Cajun Aces on the Food Network. The duo met while studying at the Louisiana Culinary Institute in Baton Rouge. “We started dating, while attending school, and decided that whatever we did after we graduated, we wanted to do it together,” Sam says. “So we just jumped right into the restaurant business by opening Hot Tails in New Roads.”

When they opened Hot Tails, Sam and Cody lived in an old FEMA trailer behind the restaurant for the first year where they did business with two of their chefs. “Four people in a one-bedroom FEMA trailer, but we made it work,” Cody says. Some of the specialties at Hot Tails include the boiled crawfish (when in season) — the Carroll’s raise them — the po-boys, the loaded fries and the oyster Rockefeller burger (a half-pound burger topped with spinach and artichoke sauce, and fried oysters).

While Hot Tails is a fish house-style restaurant, where you can come in after fishing, hunting or a long day on the farm, Sac-a-lait is about interpreting classic Louisiana dishes in a new modern light. “Even though the food is different, we have fun at both,” Cody says. “The atmosphere at both restaurants is about having a good time because that is what Louisiana culture is all about — a celebration of food.”

Sam and Cody opened Sac-a-lait in March 2015. “We searched in Baton Rouge and New Orleans, and then one morning Cody came across this beautiful warehouse space in an old cotton mill and we were hooked,” Sam says. “The reception of Sac-a-lait has been great! Going from small town New Roads to New Orleans was an adjustment, but it has been amazing. We are so grateful to be a part of the greatest food city in the world.”

While Cody is skilled in classic Louisiana cooking, such as gumbos, stews and jambalayas, he is also incredibly skilled at plating. “A lot of people don’t know this, but Cody is a very talented artist,” Sam says. “He can draw anything. He uses that skill when it comes to plating our dishes at Sac-a-lait. He sketches how he wants the plate to look and then executes it.” Meanwhile, Cody admired Sam’s speed in the kitchen. “[It’s] something to keep up with,” he says. “She also has a great presence on camera. The first televised cooking segment we ever did on the local news in Baton Rouge, I was so nervous. Sam, on the other hand, was a natural at it. It’s crazy how calm she is in front of the camera.”

And that brings us to their show on the Food Network. According to Sam, a production company contacted the couple on Facebook asking if they were really husband and wife chefs. They sent a small production crew to film the Carrolls in the restaurants and on their farm in Batchelor, La. After that, they were offered a pilot. “It sounds crazy and quick, but that first Facebook message was sent almost two years ago,” Sam says. “We never sought anyone out. They came to us. It has been a great experience working with High Noon Production and Food Network.”

Of the episodes that aired in December, Cody says his favorite was the Redfish and Okra episode. “We got to go bow fishing in the marsh, and I love Grand Isle,” he says. Other dishes that have been highlighted on the show include crawfish, mirliton, wild boar, figs, turkey and pecans. “The show is so jam-packed with food that one of the Food Network executives was shocked how it all fit into a 30 minute segment,” Sam adds. 1051 Annunciation St., (504) 324-3658, sac-a-laitrestaurant.com

What can readers expect next from you?
“The show is almost like having another restaurant,” Cody says. “It’s the same amount of hours as working in a restaurant but instead we are filming. We are always looking at opening new restaurants because we are crazy.”

What are some staple ingredients that are always in your fridge and pantry?
“We probably have a record amount of hot sauces in our house — and beer,” Sam says.

Who does most of the cooking at home?
“I make beef stews, lasagnas and pastas,” Sam says. “I really like to make new things at home when I can. We always have a freezer full of venison, fish and squirrel, so I’m always doing my best to put a dent in it to make room for Cody’s next kill or catch. We both love to cook at home. We tag team on the dishes, and have fun and make sure our daughter is in on it too.”

What are some unchartered areas of cooking that you have not explored yet that you are excited to try?
“I want to travel to Sichuan because I love spice,” Cody says.

“I want to tackle Sicilian food,” Sam adds. “Typically, when there is a cuisine that we want to learn more about, we try to plan a trip to travel there and immerse ourselves in the food culture.”

With all of this good food, how do you two stay in shape?
“We don’t, and we are okay with that,” Cody says. “One day it will catch up to us, but until then, can I have seconds?”