Lay Off the Bottle

For palatable, portable wine, it’s time to think inside the box 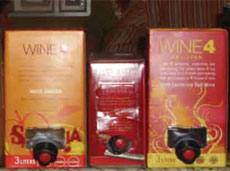 The couple were introduced through common friends and immediately hit it off. The attractive, professional duo soon discovered that they shared many interests, ranging from cooking and beach vacations to biking and LSU football. However, what appeared to be a match made in heaven was soon thrust completely off-course! And it was all due to an unassuming cardboard box filled with fermented grape juice in her stainless steel Frigidaire. Yes, she was a boxed wine drinker! For him, being an avid collector of classic Bordeaux and white Burgundy, it was simply more than he could handle. Doomsville was where they were headed.

So perhaps this sad scenario is somewhat fictitious—okay, it’s totally made up—but it could happen. For decades, boxed wine has been the ugly duckling of the wine world and with it has come a rather unflattering stigma. Until now that is. And while I seriously doubt that we’ll suddenly see an elegant swan emerge, what was once completely and utterly shunned by “real” wine drinkers is slowly evolving into a slightly cute sparrow.

I agree that jabbing your way into a cardboard box, popping out a plastic plug and watching juice glug into your wineglass is far less glamorous than popping a cork from an artfully labeled, sensuously shaped bottle. However, these homely vessels have some practical advantages. If you do find one you truly enjoy, and you would prefer to keep your discovery a secret, simply pour it into a wine decanter before your guests arrive and no one will be the wiser!

Bargain Bounty Boxed wines offer a terrific value, which is important, particularly during these challenging economic times. Most contain three to four bottles of wine per box, but because packaging is less expensive, they cost less than if you were to purchase the equivalent in bottle form.

Staying Power Unlike bottled wines, which lose their freshness within a couple of days of opening, boxed alternatives can last up to a month (some say six weeks) after opening and still retain their freshness. This is due to the airtight pouch inside, which protects the wine from oxidation.

Eco-friendly Boxed wine packaging equals about 4 percent of its total weight as opposed to bottled wine, which weighs in at about 70 percent, leading to a smaller carbon footprint. Additionally, the box is often recyclable.

Portability Boxed wines are lighter and unbreakable, making them easier to stack, store (expect in a wine cooler, of course) and tote around—perfect for the beach, poolside or wherever glass is unwelcome. Boxed wines are ideal whenever “vino on the go” is essential.

Many of the old-school boxed wine brands (the ones that have facilitated this loathsome reputation) still exist, and yes, they should still be avoided. However, new labels, as well as some familiar brands packaged in this convenient form, continue to emerge and are finding their way to local wine aisles. I recently held a “Get Boxed” wine tasting at my home, where I invited friends to pick up a box of whatever looked interesting to them. We ended up with just over a dozen options, and I encouraged everyone to share their comments on paper as they tasted their way down the lane of boxes. As you can image, their feedback grew more and more interesting (and less coherent) as the evening unfolded.

Ultimately, we decided that many are not worth the money, despite their insignificant price. A few were actually good and most fell somewhere in between. The winner included Hobo Zinfandel, described as “light with a nice zin pepper,” “quite pleasant and smooth” and “great for a zinfandel; even enjoyable.” This was by far the best of the bunch, which was evident by its being the first box sucked dry. The second vat to empty was Seven, a Spanish blend packaged in what is being dubbed an “Octavian,” apparently for its eight sides (several others came in Octavian boxes, including Hobo zinfandel) and was noted to be “soft with cherry fruit flavors” and “pretty nice with bright fruit.”

We tasted two Bota Box offerings: the merlot, which fell in the middle for most and was merely labeled “not bad,” and the pinot grigio, which, while rather light and simple, was described as “cheap and drinkable; the best of the pinot grigios by far.” Needless to say, the other pinot grigios we sampled were downright awful! World Market sells its own brand produced by Trinchero, of which we sampled three: White Sangria (rather sweet, but if you’re into sweet, you may like it); Wine for Chilling (the best of all the whites, it was floral on the nose with gewürztraminer-like qualities and peachy fruit flavors); and Wine for Grilling (the third most popular of the night, it was noted to be “medium-bodied, easy-drinking, soft and pleasant” and would probably benefit with a slight chill, as one taster mentioned). The only other one worth mentioning is Bandit Cabernet Sauvignon, which received comments like “good, but light for a cab” and “a simple, easy-drinking red table wine.”

Other brands worth seeking out but that we did not explore include Bonny Doon Big House Red and White, Pinot Evil Pinot Noir (skip the pinot grigio), Andes Peak Select Malbec and Hardy’s Shiraz.

As the evening came to a close, the overall feeling (other than buzzed and giddy) was that boxed wines have taken a gigantic leap forward from those we stocked in our collage apartments. A few we tried were quite tasty and a bargain, but buyer beware: Some are still rather vile. However, with a little pomegranate liqueur, triple sec and loads of fresh fruit, they did make one hell of a sangria the next day!