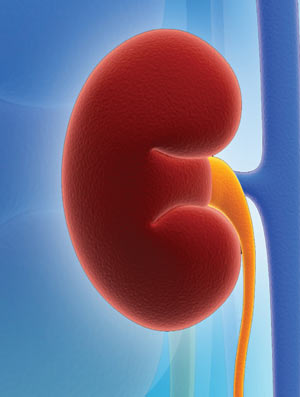 The kidneys play a vital role in overall health. “The main functions are to filter the wastes that are produced by the body, help maintain the fluid balance and electrolytes, make hormones that help to control blood counts and control the health of your bones,” said Dr. Pierre Blemur, nephrologist at Ochsner Health System in New Orleans. The trouble with kidney disease is that most people are unaware of it until they have less than 15 percent of kidney function. “Unless you have blood or urine tests done before that point, most patients are completely asymptomatic,” said Blemur.

Once someone is down to less than 15 percent or 20 percent of function, they may suspect something is wrong. “The most common things people complain of are decreased appetite, food not tasting the same and increased fatigue,” said Blemur. Since these are general symptoms that are often non-specific, it can be tough to make the diagnosis. “Usually the primary care doctor checks blood and urine tests and once an abnormality is identified in either one of those, they get referred to nephrologists,” said Blemur. The urine test looks for protein and red blood cells, which help indicate if there is a problem in the kidney. “If any of those things are positive, patients would be referred to a nephrologist for further testing to see why they have that abnormality,” said Blemur.

A kidney function test is also done. “We take the creatinine number and plug it into an equation to come up with a number that we call the glomerular filtration rate and that gives us an idea of what percentage the kidney is working at,” said Blemur. The creatinine number depends on age, sex, race, body mass and other factors.

Says Blemur, “It seems to be a growing problem with the growing epidemic of obesity and diabetes.” As more young people become overweight, their risk for kidney troubles increases and doctors are taking notice. “Primary doctors have been more vigilant about screening for kidney disease and referring those patients to nephrologists because studies have shown that patients do better under a nephrologist’s care when they are referred early,” said Blemur. This is one way to prevent the progression of kidney disease to end stage renal disease, which leads to the need for dialysis.

Lifestyle choices can make a difference. This means being attentive to what you eat. Lindberg says, “Fish and chicken are fine but heavy, red meats are hard on the kidney and the more protein that is loaded on the kidney, the harder it has to filter and it cannot start with ease.” Portion control and eating in moderation are important. Patients should be open with their doctors about medications they are taking. “You should avoid over-the-counter medicines like Aleve, Motrin and the non-steroidal anti-inflammatory drugs,” Lindberg said. The use of pain medications should also be restricted. Exercise can be helpful as long as you discuss your program with your doctor to be sure it’s well-tolerated.

Being aware of your health issues can also delay the progression of kidney disease. “Oftentimes we have patients who are overweight or obese, where weight loss would help a lot in terms of decreasing the risk for developing more severe kidney disease,” said Blemur. Doing your best to stay in good general health has an impact. “The kidneys are sensitive to what is going on in the rest of the body and whether you have any systemic disease,” Blemur said.

Help is out there for those who struggle with kidney problems. “Medications like ace inhibitors and angiotensive receptor blockers are the two main types of medications we can use in patients, but they have to be used under the care of a physician,” Blemur said.

If you suspect you may have a kidney issue, do not be afraid to approach the topic with your doctor. “It is important for the general population to talk to their primary doctors and ask specific questions about their kidneys in terms of whether they have been looked into, checked and if urine studies have been done along with blood tests,” Blemur said. “When patients first come to see nephrologists, they are scared because they assume that they will need dialysis and most of the time that is not the case and something can be done to prevent that.”

By being pro-active people can identify kidney issues early on and seek the best care. “The best treatment is prevention and the earlier we are able to get a hold of patients with chronic kidney disease, the better chance we have at managing and treating it to help prevent it from progressing to a more severe stage,” said Blemur. The good news is that most people do fine. “Most of the time, we are able to keep people’s kidney function nice and stable for a long period of time just with simple lifestyle modification,” Blemur said.

When it comes to kidney health, patient education is most important. “The more people know about it, the more comfortable they will be about seeking attention for kidney issues,” said Blemur. “Making people aware of kidney disease was not really done in the past, but now people are paying attention.”

404
previous Thyroid Health
next All About Vitamin D