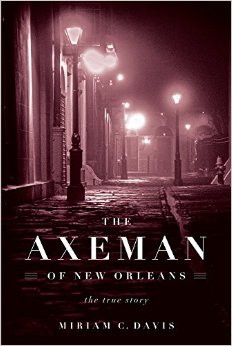 New Orleans is known for having a spooky underbelly. Whether it’s voodoo or vampires, it seems the city that care forgot has it all — including the history of a murderous rampage. In her new book, The Axeman of New Orleans: The True Story ($27, Chicago Review Press), author Miriam C. Davis chronicles the rampage of America’s first serial killer who stalked the streets of New Orleans from 1910 to 1919. The story has been the subject of much speculation — most recently on the FX television series American Horror Story.

The book follows the bloodlust, panic and deception caused by the mysterious Axeman’s string of murders that terrorized the city for nearly a decade. Davis also reveals new details and evidence on theories about who the psychopathic killer could be — in a case that has puzzled Americans for almost a century. Available at bookstores and at ipgbook.com

Move to the Music: The recently renovated Carver Theater announces its programming schedule.

After an $8 million renovation — including modern technology enhancements such as moving light fixtures, sound equipment augmentation and video production capabilities — the historic Carver Theater is back up and running as a premiere live music venue. Located in the Tremé, the 16,000-square foot music and entertainment venue features some of the Big Easy’s best jazz, big band, blues, brass and more. And even better, the theater has announced the debut of a weekly jazz, brass and blues music series. The $10 weekday music series includes Monday Blues, Wednesday Jazz and Thursday Brass — with food trucks such as Dat Dog and craft beer from Urban South Brewery.

The theater also boasts a fully renovated, second floor VIP Lounge with space for up to 120 guests, multiple stage-viewing balconies, a private bar and a VIP lounge area. The VIP Lounge can also be used for intimate shows and events like music bookings, comedy shows, community socials or happy hours.

In terms of what’s next: The Carver Theater plans to expand its programming to include annual street festivals, long-running musical productions and additional touring productions. Additional future plans include the formation of a 501(c)-3, the Carver Foundation, to provide educational, performance and entertainment opportunities to the youth of Tremé.

Rites and Revelry: A new exhibition at NOMA draws parallels between Venice and New Orleans.

Fittingly enough, the New Orleans Museum of Art is now showing an exhibition entitled A Life of Seduction: Venice in the 1700s — that coincides with Mardi Gras. The exhibition conjures one of Italy’s most fabled destinations: a gloriously theatrical setting for festivals, balls, processions and Carnival revelry, featuring a collection of objects that convey the pageantry, ceremony and extravagance of Venetian life in the 1700s. A Life of Seduction invites visitors to imagine life in 18th century Venice: the era of Casanova, Vivaldi, Tiepolo and many others who spread Venetian taste and style throughout the world.

Guest-curated by the former director of the Civic Museums of Venice, Giandomenico Romanelli, the exhibition presents four themes: A City that Lives on Water, the Celebration of Power, Aristocratic Life in Town and Country, and the City as Theater. Items on view include 300-year-old carnival masks, costumes and robes, along with shoes, handbags and regal glass objects. “A significant strength of this exhibition is its historical and cultural point of view and the distinctive range of objects that tell the story,” says Vanessa Schmid, curator at NOMA.

NOMA is the sole venue in the United States presenting this exhibition. It continues through May 21 with an array of lectures, films and festivities. Related programs include the lecture, Shakespeare and Mardi Gras, by Jennifer C. Vaught from the University of Louisiana, Lafayette (March 17 at 6:30 p.m.); the lecture Masks and Identity in Casanova’s Venice, by James H. Johnston from Boston University (March 24 at 6 p.m.); and the lecture Canals, Cellos and Costumes: Eighteenth-Century Venice from Vivaldi to Guardi, by Peter Björn Kerber, assistant curator at the J. Paul Getty Museum (March 31 at 6:30 p.m.). Also be sure to catch the Masquerade at NOMA, part of Friday Nights at NOMA, open until midnight with exclusive programming (May 12 at 5 p.m.). 1 Collins Diboll Circle, (504) 658-4100, noma.org