From Past to Future: New Orleans Museum of Art showcases a special exhibition that focuses on forgotten or marginalized histories of the city. 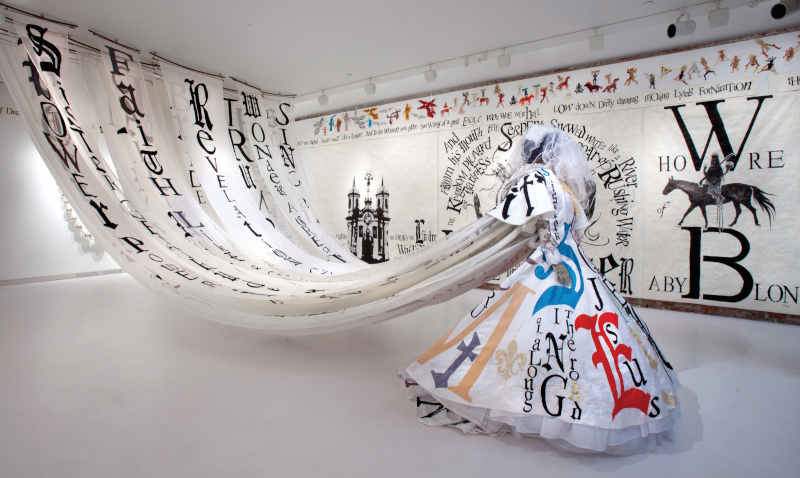 A new exhibition at the New Orleans Museum of Art — Changing Course: Reflecting on New Orleans Histories, on view June 29-Sept. 16 — celebrates the New Orleans Tricentennial by bringing together a group of seven contemporary art projects that explore New Orleans’ complex past, while also looking toward the future. Projects by artists Katrina Andry, Willie Birch, Lesley Dill, L. Kasimu Harris, Skylar Fein, The Everyday Projects and The Propeller Group each return to defining moments in New Orleans’ history that continue to frame art and life in the Crescent City today.

For example, artist Skylar Fein’s installation, Remember the Upstairs Lounge (2008), commemorates a 1973 arson at the Upstairs Lounge (a popular gay bar in the French Quarter), while also continuing the conversation around ongoing violence against LGBTQ communities. Meanwhile, a new installation of woodblock prints by Katrina Andry addresses questions of racial and economic disparity and the uneven urban development in New Orleans after Hurricane Katrina. And in the ongoing exhibition by L. Kasimu Harris, War on the Benighted, viewers will see photographs that place African American history at the center of a visual narrative that questions the history of public education in New Orleans.

Two additional project components offer spaces for community reflection. Take The Everyday Projects, a collective of photojournalists who use social media to combat clichéd representations of communities worldwide. They will bring their Pulitzer Center-sponsored curriculum to New Orleans with #EverydayNewOrleans, encouraging participants to use photography to share their unique perspectives on life in their neighborhoods throughout Greater New Orleans.

Of the Sea: A gigantic seahorse installation joins the Poydras Corridor Sculpture Exhibition.

A newly commissioned skeletal seahorse sculpture, entitled St. Kampos by artist Ashley Pridmore, is now on public display as part of the Poydras Corridor Sculpture Exhibition presented by The Helis Foundation. The PCSE is the South’s leading rotating public art exhibition that already features 24 artworks by iconic sculptors, including Mark diSuvero, Chakaia Booker and John T. Scott. Pridmore, who has deep personal ties to the Gulf Coast, works between New Orleans, Texas and New York. She is also the studio assistant of American painter, John Alexander.

“My work is an exploration of decomposition and recomposition using bones, leaves, branches, shells, quills, teeth and thorns,” Pridmore says. “When sifting through fragments of natural decay, it becomes possible to examine internal structure. This fascination with skeleton and frame evokes imagery of discarded human objects undergoing entropy and speaks of the delicacy of an ecosystem trying to swallow the litter of humankind.”

The PCSE, founded by sculptor Michael Manjarris shortly after Hurricane Katrina — is one of the South’s leading rotating public sculpture exhibitions. To date, the PCSE has installed 35 sculptures by artists of local and international acclaim on Poydras Street between Convention Center Boulevard and S. Galvez Street. thehelisfoundation.org

A new work by UK artist Robin Reynolds, entitled “New Orleans: Between Heaven and Hell,” recently debuted at The Historic New Orleans Collection as part of a preview for the institution’s upcoming exhibition Art of the City: Postmodern to Post-Katrina, presented by The Helis Foundation. The three-foot by six-foot piece, created in pen and ink, depicts an American city, held aloft by parading figures from throughout the Crescent City’s 300-year history. A companion interactive tool, created by Reynolds’s brother Simon Reynolds, allows visitors to explore the work on a tablet that then connects them to “microhistories” (prepared by British writer Cathy Loughran) that will, in turn, lead visitors to objects and documents in THNOC’s holdings.

“Between Heaven and Hell” celebrates the joy and eccentricities that have long defined New Orleans, and that continue to do so today. “As a subject [New Orleans] was irresistible, but also overwhelming,” Reynolds says. “You hear people say, in conversation, ‘Only in New Orleans,’ and you don’t have to be there long to see why. The history is almost impossibly rich in variety, and the characters, past and present, are endlessly entertaining.”

The work of art also integrates stories of the city’s painful past, from its central role in the domestic slave trade to the fires, plagues, wars and weather events through which it has survived.

“New Orleans: Between Heaven and Hell,” will remain on view at THNOC until it appears in the full iteration of Art of the City this fall when THNOC’s new exhibition center opens. 533 Royal St., (504) 523-4662, hnoc.org